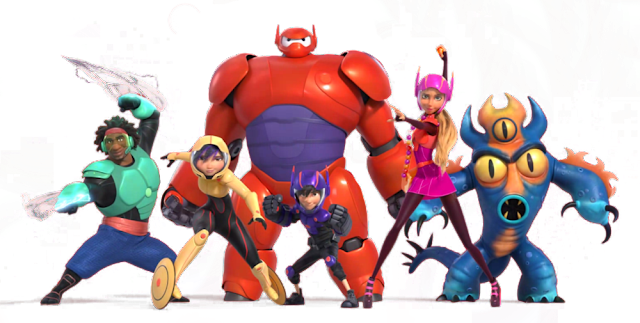 This year for Halloween we dressed as characters from Big Hero 6! 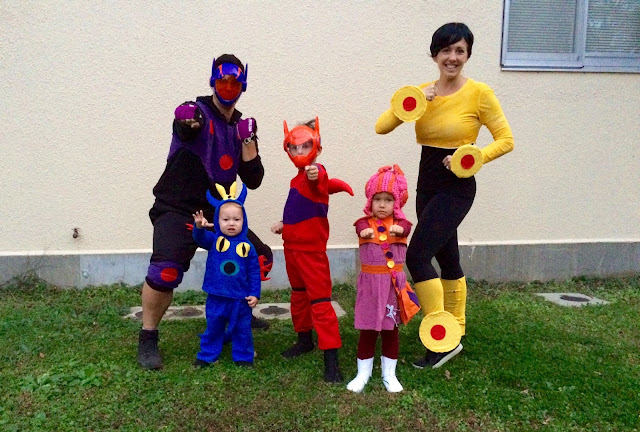 Peter dressed as Hiro Hamada, I was Go Go Tomago, Will was Baymax, Clara was Honey Lemon, and Bennett was Fred!  Sadly, we didn't have a Wasabi, but I think it worked anyway.  Keep reading to find out how we made the costumes! 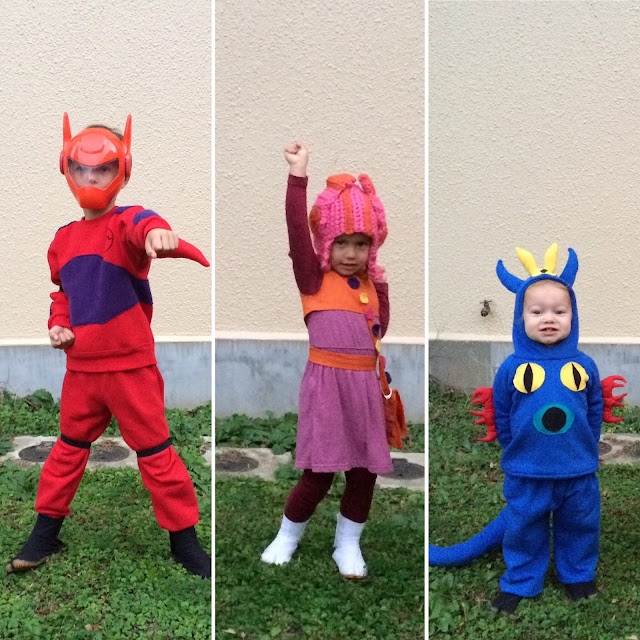 For Will's Baymax costume, we bought his mask and we also bought him a pair of red sweats.  Then I took purple fleece and sewed it onto the body of the sweatshirt.  I made the wings by sewing a basic wing shape, stuffing them, and then sewing them onto the back of his sweatshirt.  I made the black "hinges" or "joints" around his knees and elbows by just sewing loops of black elastic that he slipped on over the sweats.  Then, we just drew on his access port with black permanent marker, and his costume was finished! 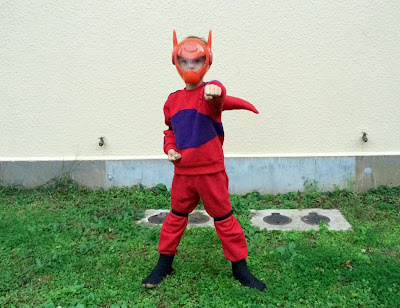 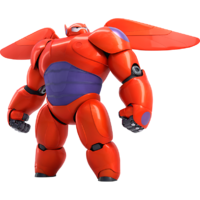 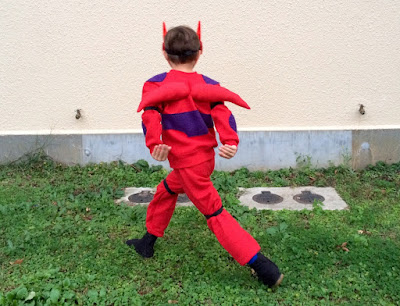 Go Go Tomago:  For my costume, I wore a black wig (easier than trying to make myself a helmet, plus I already had the wig!).  Then i just wore black leggings and a black t-shirt, with a yellow crop top over the top.  I could not, for the life of me, find a long-sleeved yellow shirt anywhere, nor could I find any yellow fabric dye (and I didn't have the time to order any off of amazon and have it shipped here), so I ended up cutting an old white shirt that I had and spray painted it yellow!  While I would not suggest doing this for any piece of clothing that you want to last, it worked perfectly for a couple of nights of Halloween parties and trick-or-treating!  Then, I made simple leg covers by just sewing a tube shape out of an old yellow pillowcase I had in my fabric collection.  We made the discs for my ankles and wrists by cutting 4 circles out of card board and glueing yellow fleece and small red circles onto them.  Then I just stitched the edges closed.  I also made small loops of elastic and stitched them onto the backsides so that I could slip them over my hands and feet. 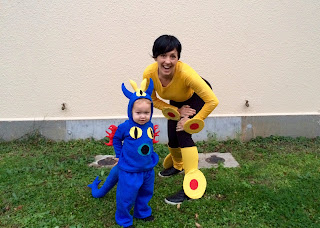 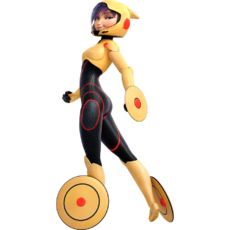 Fred:  This costume was by far my favorite, but it was also the most time-consuming and intensive!  I could not find blue sweats for Bennett's costume anywhere, so I ended up buying some blue sweatshirt fleece from a seller on eBay so that I could make my own sweats!  I found this great free pattern for the sweatshirt and I just used a pair of pants that he already has as the pattern for his pants.  Once I had the sweats made, I was able to just cut out the shapes for the eyes and mouth (actually, Peter cut out all of the extra pieces for me!) and sew them on.  Then I made the horns and flames by sewing and stuffing the shapes and hand sewing them onto the hood and sleeves.  I made the tail using this pattern, but changed up the shape so there were only spikes on the end and I made it curved to match Fred's. 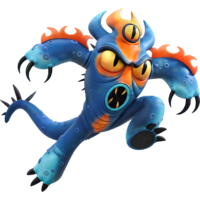 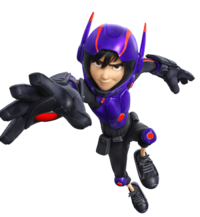 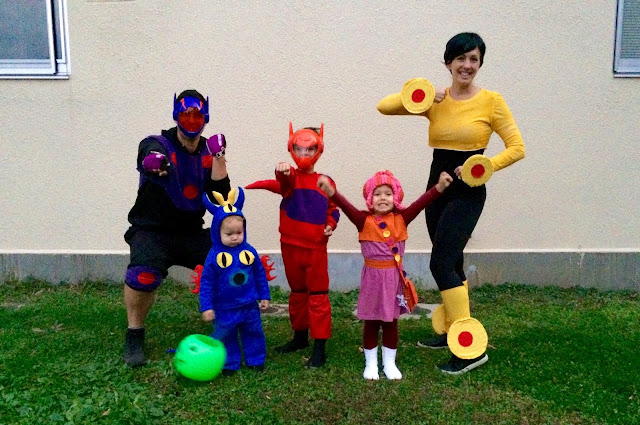 Hiro:  Peter's costume was the easiest to execute!  We bought the mask and a set of black sweats, then used an old t-shirt he had and cut it and just sewed it straight onto the sweatshirt.  Then I sewed the red circles onto the purple "armor".  We used more of the same purple t-shirt fabric and sewed small tubes to go over his knees and stitched two more red circles onto them.  Then, he just slid them up over his knees and his costume was finished! 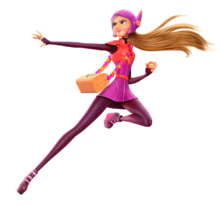 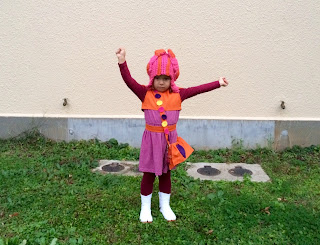 Honey Lemon:  To create Honey Lemon's costume, we already had a pink dress for her to wear, and then I bought her a long sleeved shirt.  I couldn't find matching leggings, so I bought an XL women's t-shirt in the right color and made her some leggings.  I had made her her purse for her birthday earlier this year, and then I just used more of the same orange fabric to make armor (I made a basic vest pattern and had her wear it backwards, then I just sewing small triangles and attached them to the shoulders) and a belt.  Then I crocheted her helmet using a basic kid's hat pattern and made up the rest as I went! 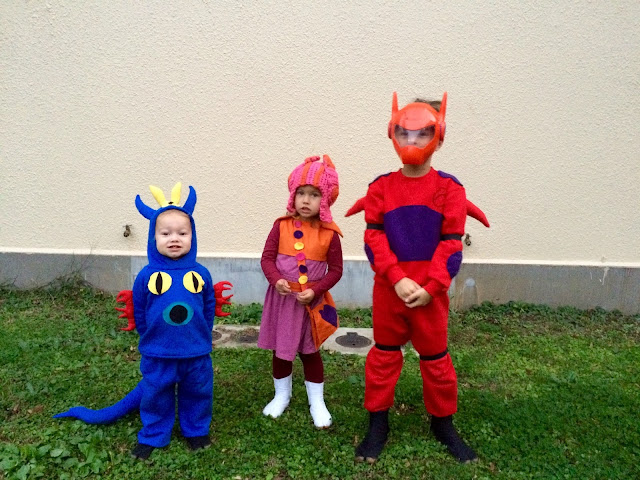 Here's a shot of Benny about to super jump just like Fred does in the movie, however, Bennett has a little bit of a hard time getting off the ground :) 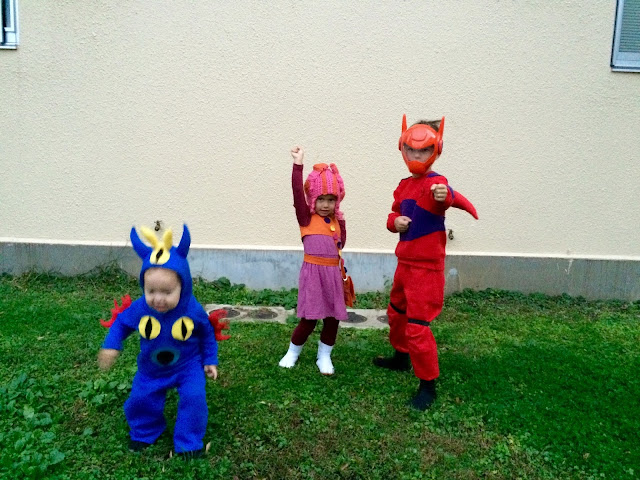 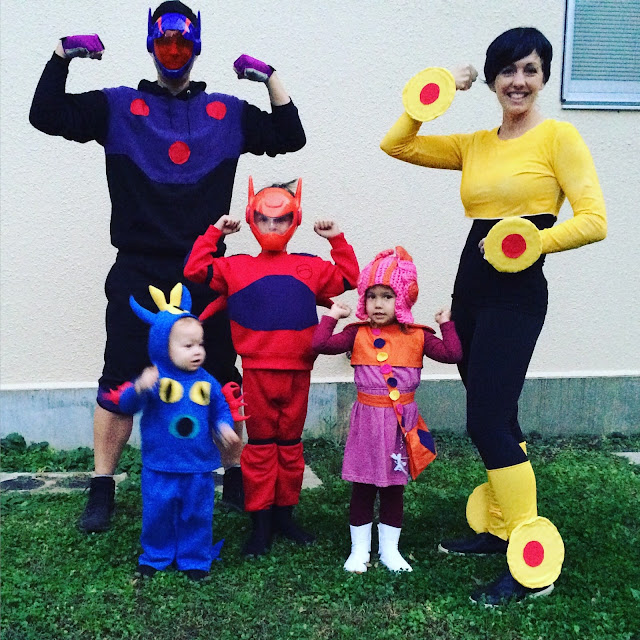 Here we are about to go trick-or-treating . . . 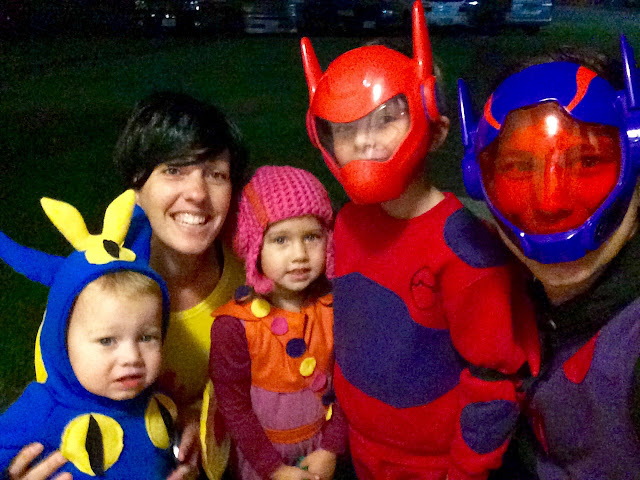 And, then walking home after a very successful night.  I loved watching that little Fred tail swish back and forth as Benny walked around! 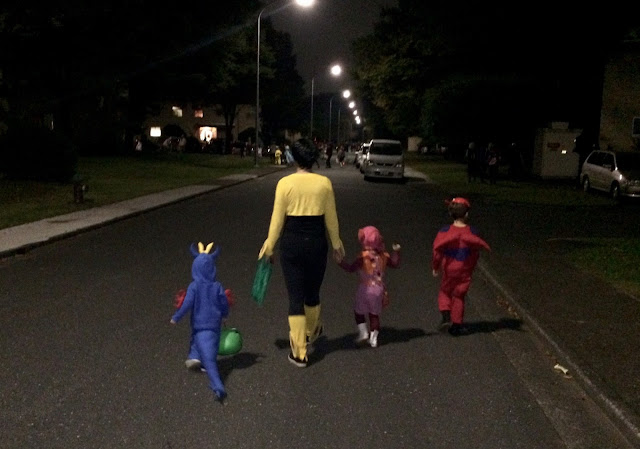 And just enjoying the spoils . . . 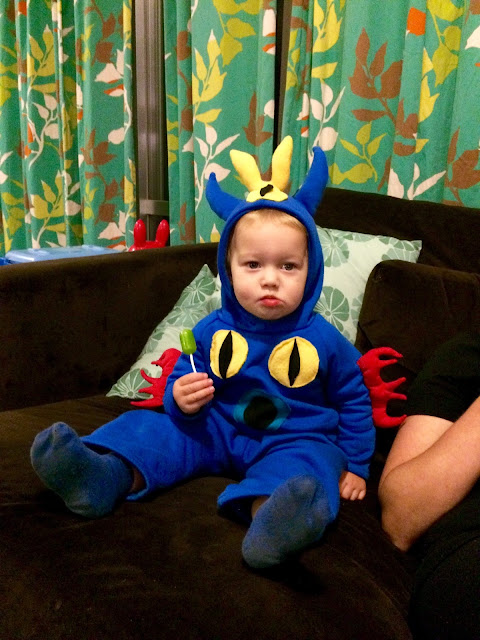 It was a super fun Halloween!  But, I'm secretly glad it's over and that I don't have to make any more costumes for a whole year!
Posted by Emily Frandsen at 5:04 PM

Emily Frandsen
Welcome to my blog where we take it easy and try our best to make it fun! I have three awesome kids and a husband that makes me laugh. I love to share our family travelogue, my crafting projects, activities to do with kids, and products I love. Drop me a line if you have any questions or comments!